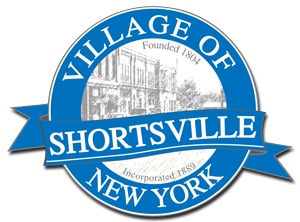 Where Life is just better.

Yes, once part of a wilderness-rolling hills, a sparkling stream with many fish and game in the forest. Then came a settler from Pittstown, later known as Honeoye, New York. His name was Theophilus Short, born in 1771 of old New England stock. He liked the spot, saw the stream-and then his dream.

In 1804 he erected his first flour mill-the first to use the water power of the Canandaigua Outlet here. That same year he built a saw mill on the east bank of the stream. His home, a log house east of the outlet, was the one and only house in what became known as Shorts Mills-later, Shortsville.

Mills sprang up; a grist mill, whiskey distillery, woolen mill, carding mill and three paper mills. A blast furnace was operated briefly after 1819, as well as a pottery. It is interesting to note that the paper on which the Mormon Bible was printed in 1830 was made at the Jones Mill on Water Street. E.B. Grandin printed 5,000 copies in Palmyra, for which Martin Harris mortgaged his farm for $3,000.

A road was built from Canandaigua to Palmyra through Shortsville by a stock company in 1849 which was known as the Plank Road. There was a toll gate in operation at what was then Crane’s Corners, south of the Booth Homestead, now owned by Elisha DeVries, Jr.

In 1844 the New York Central Railroad built a railroad from Auburn to Rochester. The Auburn Road, as it was known, had a station at Shortsville on the east side of the tracks which was later rebuilt on the west side.

In 1850, Hiram and Calvin Brown came to Shortsville and in 1855 established the Empire Drill Company on part of the old Short property. It flourished for fifty years, then was sold to a syndicate and the plant was dismantled and moved to Indiana. The buildings are now owned by the Papec Machine Company, which manufactures ensilage cutters and other farm equipment.

Just south of the village limits was one of the largest spoke and wheel companies in this state at the time. It was established in 1889 and although it was located in Littleville, it was called the Shortsville Wheel Company. In the early 1890’s there was a Shortsville Cart Company too.

In 1889 Shortsville became an incorporated village and elected Oliver Titus as the first village president (as the Mayor was then called). The population at that time was about 1,000, seven or eight times what it had been in 1850. By this time, the village had four churches; the Presbyterian, organized in 1860 was the oldest, but there was also a Catholic, the Methodist and the Episcopal church. Shortsville has had a school house since 1807, but after 1886 it had an excellent Union School to be proud of.

Up until 1880 there was no hotel in the village except a stage coach house on Water Street known as the Central House. It burned in 1902, but was rebuilt and is now the home of the present postmaster, John Fiero. About this time a large hotel was built by Jeanette and Newton Harrington. It was located where the Papec parking lot is now and it was known for its fine food. Among the other establishments in the village were: the Cottage Hotel, the Mather Bank, the Buck Library, a barber shop, livery stable, cobbler shop, jewelry store, produce store, two meat markets and a planning mill. The first issue of the Shortsville Enterprise came off the press on February 3, 1883. It was published for many years by three generations of the Perry family.

The luck of the Irish was not with Shortsville on St. Patrick’s Day of 1902. At 1:15 in the morning, during a terrific ice storm, the entire business section of Main Street was destroyed by fire which had started in the Cottage Hotel. It took about two years to rebuild all of the structures, but the stores were open for business once again.

At the start of World War I in 1917, all of the towns were working to sell Liberty Bonds and the schoolchildren were great salespeople. All sorts of inducements were offered by our government and one was that any village of a certain size which could sell a certain amount of bonds within a given period of time was given the privilege of naming a ship. Shortsville made it, and the “S.S. Shortsville” was put into

service carrying supplies to our troops in Europe. On one return trip from Sweden to America a strange thing happened. One day out of port, two children appeared on deck-stowaways! The 15 year old girl and her 13 year old brother were taken at once to Captain Cook’s quarters, where, after their stories were heard, were treated as guests for the remainder of the voyage. A few days after arrival in the United States an uncle from Rhode Island came to claim them.

Today Shortsville is a busy, happy village with many fine homes and tree-lined streets. Its population, just over 1,500 enjoys the advantage of a fine central school system and a local telephone company, both shared by the other member of the “Twin Cities” the Village of Manchester. Both were named after the famed orator of the Seneca Indians, Red Jacket. It has four important industries, the Papec Machine Company, Silver Floss Food Division of Curts- Burns, the Woric Corporation, and just outside the village, Pioneer Thresher, Inc. Among its many other assets are a well equipped and capable volunteer fire department and ambulance team, effective police protection, a modern post office and village hall, a newly remodeled bank, a weekly newspaper, railroad freight service, two churches and several social and civic organizations.

Not the least among its assets are its parks. Budd Park provides space and facilities for many activities throughout the year, and across Water Street from it is the new Jones-Blunt Park which was given to the village by a descendent of the owners of the old Jones Paper Mill. This park is still being laid out, but when finished it will be a beautiful addition to the village as it lies along the banks of the Canandaigua Outlet, the same stream which lured our first settler, whose name lives on in the village he founded so many years ago.

We are very eager for you to share your historical photos and stories about Shortsville. Please contact Sharon Trimm: 585-289-9330

Today Shortsville is a busy, happy village with many fine homes and tree-lined streets. Its population, just over 1,500 enjoys the advantage of a fine central school system and a local telephone company, both shared by the other member of the “Twin Cities” the Village of Manchester.
learn more